What the World Eats 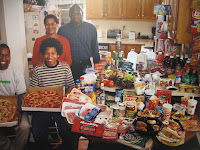 There's an interesting exhibit on at the Bell Museum through May about what people eat around the world. The bulk of the exhibit is comprised of photos of families with the food that they consume in an average week.

The caption next to the photo of the American family cited this supposedly typical family spends around $280/wk on food. It might be a bit more than that, I can't recall exactly. Does that figure strike anyone else as exorbitant? Our total monthly bill is less than half of what that adds up to, but maybe that's because we don't have teenagers like the family featured. They also had primarily prepared and packaged foods which adds a lot of expense.

Then you have the Japanese family that has fish for 2 meals each day. The family from Mali that eats only grains and beans from communal bowls. The Mexican family that drinks 10 liters of Coke each week. Fascinating stuff to see! Naturally when you're representing an entire country with one family, things are going to be a little skewed, but the exhibit does give you a lot to discuss with your kids.

It also made me reconsider the whole idea of menu-planning. What would it be like to have fish 2x a day every day, or eat only rice and beans? I would be lost, but would enjoy such a different experience preparing meals.
Posted by Nicole at 7:59 PM