A Note on Falafels

This is a picture of sand. It could also pass for the spitting image of the falafels we made Monday night.

It was around a hot cauldron of boiling oil in Hurgada, Egypt that my husband and I developed a keen taste for falafels. Our kids haven't exactly developed it yet, but we keep trying and figure one of these days it'll take. Or maybe we'll just have to head back to Egypt and let some experts do the convincing.

I've made falafels from scratch a couple of times. My favorite from-scratch version is Bon Appetit falafels with cilantro yogurt, if you want to try it. Usually, though, I buy boxed mixes that only require water. The problem the past few years has been finding a consistent source that carries the brand I like.

Monday night we tried a new brand (Fantastic Foods). The flavor was excellent, but the product itself fell completely apart no matter what variations in cooking and ball-making we tried. It was so bad that we resorted to making little open-faced pitas with cucumber sauce and crumbs (the falafel) sprinkled generously on top. They simply wouldn't keep their form. So, I was surprised when a review I came across tonight included that brand among the favorites. Hmph. Maybe I need a hot cauldron of oil?

The most consistent brand I've found is Manischewitz. They know how to make a tasty falafel that holds together with minimal skill or effort. Cub (my local grocery) no longer carries them, and the other markets I've tried have other brands I don't like as much. Alas. Near East is a passable second, but they tend to have tiny hard chunks (chickpea, presumably) that make the texture less pleasant. Know a source for Manischewitz in the Twin Cities? Let me know!
Posted by Nicole at 10:07 PM No comments:

Mon – rigatoni isabella
Tues – chili con carne (HyVee cookbook)
Weds – falafels
Thurs – coffee-braised short ribs with ancho chiles (Bon Appetite, Oct '04)
Fri – preschool potluck (still need to pick what to make)
Alt – rotisserie chicken; breakfast
---
Had a busy weekend of camping, getting kids' pictures taken, and unpacking. We talked over a menu while driving from pictures to music class. While the boys were at music, my daughter and I ran to the store for a quick weekly grocery trip. Worked splendidly! Helps that we still have 2 recipes left from last week that went unmade, and have Friday night out. Any potluck favorites you can recommend? Happy cooking.
Posted by Nicole at 10:35 PM 1 comment: 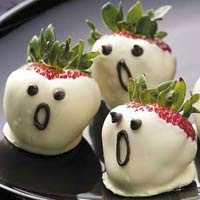 Just saw these ideas on the Taste of Home website and thought the strawberry ghosts and ogre eyeballs in cocoa were too cool.

Photo from Taste of Home website.
Posted by Nicole at 2:18 PM No comments:

I've been in a lunch-rut with my kids, so I opened myself to "inspiration shopping" at the grocery store Sunday night. "Inspiration shopping" being: look at items on the shelf with the idea that it might offer a new lunch possibility. This probably strikes some of you as obvious, but I tend to slavishly follow the list barring major sale items, so it felt mind-expanding to me.

With the help of my preschooler, here's what we came home with in addition to our pre-planned ingredients:

- can of chicken noodle soup (soup is not usually a big hit w/my kids, but she was fascinated by it coming in this form)
- veggie dip to increase the appeal of fresh-cut veggies at lunch
- frozen burritos and ingredients for fresh-made tortillas/burritos
- deli turkey (recalling we enjoyed "oven melts" for a time w/turkey and cheese)
- raspberries (they're not just for breakfast anymore!)

We had the veggie dip today. I loved it, my preschooler preferred the veggies without it, and my 2-year-old ate ONLY the dip, using the veggies as a scoop. We covered all the bases!
Posted by Nicole at 8:32 PM No comments:

Fast-Food Fixation: Cured, for the moment

Bad-food admission: For the past month I've packed more fast-food into my kids than they've had in their entire lives. We visited McDonald's, Kentucky Fried Chicken, Wendy's, whatever was close at hand at least once if not twice a week for quick snack fixes. Did three times ever happen? I hope not. Rarely a full-on meal, but I'm sure that happened too at least a few times.

This week it fell apart for me. We stopped for some very tasty chicken poppers (KFC--way better than nuggets for my tastes) for an add-on to the foods I had prepared for our morning out. I finished the snack, and felt like I didn't want another bite of fast-food for the foreseeable future. Considering we usually only eat the stuff on road trips or a rare treat (shots at the doctor? how about a McD's playland!), this isn't usually an issue.

The question now is, have I now destroyed their taste for real food? I hope not. Part of my binge was inspired by needing more lunch-time inspiration. The good news is, I think I've found renewed motivation, at least for my own palette.

Any good easy lunch ideas your kids like? Share! My husband just read a story about a McDonald's burger that was found a year later in a pocket, looking oddly similar to when it was purchased. Maybe my kids will age more slowly based on this month's diet. Yikes.
Posted by Nicole at 8:32 PM No comments:

Mon – chicken fingers & squash
Tues – fish, potatoes and greens
Weds – rigatoni w/sausage & peas (from Viva Italia)
Thurs – black bean & pumpkin soup w/ginger (from Once Upon a Tart)
Fri – spaghetti and crusty bread
Alt – burgers & oven fries
---
Something's happened where menu planning has taken approximately 4 minutes the past few weeks, including the time it takes to write the grocery list. I've been relying on lots of familiar recipes, adding only 1 or 2 new recipes a week which helps. I love it when you actually become more efficient (certainly not lazier/sloppier) at something. How often does that happen?

I also have a recipe from "Once Upon a Tart" this week, which is my favorite cookbook that I hardly ever cook from. Once Upon a Tart is a fun little bakeshop/cafe in NYC I used to go to occasionally for lunch or afternoon treat. I'm impressed the owners were willing to publish their recipes. They probably figured that no one in NYC cooks anyway, so no risk of losing customers that way. Nice resource for those of us that no longer have access to their cafe. Happy cooking.
Posted by Nicole at 12:51 PM No comments: 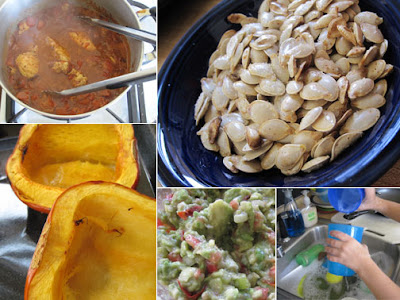 My youngest took an unexpectedly long nap Wednesday afternoon, and my preschooler and I took to the kitchen.

We spent 2 hours chopping, smooshing, toasting, mixing, steaming, and baking. Here's what we ended up with:

The most fun I've had in the kitchen in weeks. Bliss.
Posted by Nicole at 9:40 PM No comments: