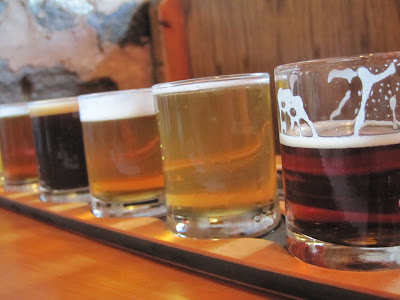 Lovely fall colors from Fitger's Brewery on a recent trip up north. Mmm.
Posted by Nicole at 12:01 AM No comments:

Here are things that haven't been working:
1. Making double batches and freeze one for later. It's a rare meal that I want to revisit in frozen form. Homemade spaghetti sauce, ok. Meatloaf? I only want to see that about once a year anyway.
2. Making things that require lots of attention to the recipe
3. Cooking before my husband gets home. I spend 2x the time, 3x the stress, and only have it ready about 20 mins earlier. I still try to do this on days that the household mood allows, but in general I've been cutting myself some slack and waiting to do the majority until he's home. Truly, it's: "Hi! How was your day? Here are the kids. I'm cooking." No slippers and newspaper right now. Maybe in a couple years. God bless you single working moms out there. You are Wonder Women!
Posted by Nicole at 8:53 PM No comments:

Teaching them to eat ugly 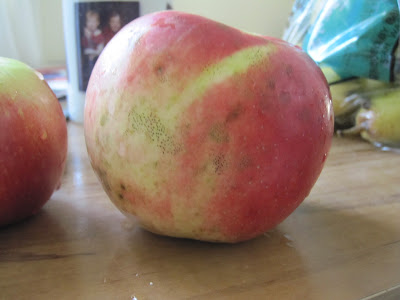 This is a photo of a deliciously crisp and juicy apple given to me by a friend (thanks, Amelia, these were FABULOUS!) who first offered this: It's organic, from a friend's farm, and although it doesn't look that great it tastes really good.

My husband and I visited Costa Rica several years ago. A local told us that in times of heavy rain, plastic bags that were put over each of the thousands of banana bunches growing on the banana plantations would fall from the trees and litter the landscape, ultimately washing into the ocean. We half expected to see plastic bags where we were diving. Either there hadn't been heavy rains recently, or the problem wasn't so bad. Not sure, but I've thought about the use of those bags a lot since then.

Other than a few items, I'm not typically too concerned about whether my food is organic or not. However, it always gives me pause when I see perfect and unblemished bananas in the produce aisle. According to our Costa-contact, the plastic bags they put over the banana bunches makes them sell better in the US market because they're unblemished. It doesn't impact the quality of the fruit for better or worse.

So I try to encourage my kids to be open to eating "ugly food." It's not what it looks like, it's what it tastes like that counts! The apple you see here was sheer perfection.
Posted by Nicole at 11:00 PM No comments:

A Whole New Ice Experience! Or not. 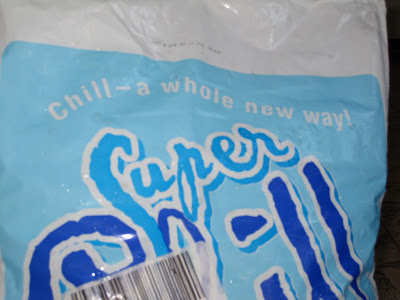 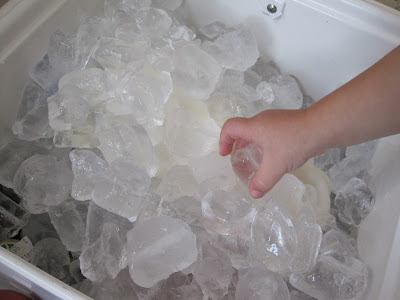 When you buy ice, it's not as though you're choosing from a variety of brands. Usually there are some different weights, and maybe block vs. cubed.

When my husband brought home Super Chill ice before our last camping trip, I was intrigued by their package claim to "chill a whole new way."

Really? Are claims like this even necessary in the ice cube industry? How different could one ice experience be from another?

My toddler was pretty intrigued by this ice, but he's only been walking the earth for a little over a year. To me, just cubes. Would have been kind of fun to find a dollar bill or cool ice shapes inside. Maybe some novelty toy frozen in one of them. Missed opportunity for Super Chill ice to become my sought-after brand of choice!

I have to conclude that it still just doesn't matter where you buy your 20lb bag of ice.
Posted by Nicole at 10:31 PM No comments:

Week 99—As of Thursday

Mon – Chicken stir-fry
Tues –  Turkey sausage and veggie fry-up
Weds – Grandma's spaghetti
Thurs – Tacos (this word means "high heels" in Spanish, which makes me like the food that much more)
Fri – Burgers or breakfast
Alts – Alfredo; falafels
---
We were supposed to attend a Kindergarten pizza party tonight at my daughter's school. I was personally thrilled, because it meant no dinner-prep, and no subsequent clean-up. Sadly, she got sick this afternoon, so no pizza party. Boo hoo. The party was smartly set-up: if you attend, just bring a pizza to share. They provided drinks and a dessert. How easy is that? Would have been fun. Ah, 2 years and we'll get the chance with our son.

For now, it's nearly the weekend. Happy Friday, and happy cooking.
Posted by Nicole at 10:25 PM No comments:

five and a half hours 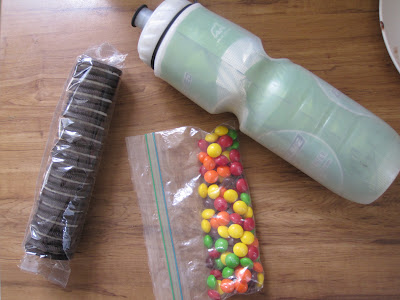 This photo is probably only relevant if you've read or watched 127 Hours. It's my version from a couple weeks ago.
There is a picture in the book that lays out all of Aron Ralston's supplies that he had to use to survive as he was trapped by a boulder for 127 hours. I won't go into his efforts to escape, other than to say it's worth a read and/or watch.
Last week, I had prepared a nice picnic lunch and tossed in some rare treats (you see above) that were left-over from our Habitat purchases. We visited my son's preschool, then planned to go on a couple hour hike in the surrounding woods, farm, and pond with the kids.
We had a nice start trekking about, and about an hour into our journey, as we were all getting nice and hungry, we settled on a picnic spot. I opened my backpack to find that somehow I hadn't actually PACKED the sandwiches, veggies, and drinks. The picture above shows what I did have. So, we did what any intrepid hiker in dire straights would do. We made lunch out of Oreos, Skittles, and a shared bottle of water. The kids thought it was awesome. Of course, this also means my 16-month-old youngest child ate this food as well. I wouldn't have even had this stuff in the house when my oldest was that age. No wonder the youngest ones get spoiled. They benefit from older-sibling corruption and more harried parents.
No limbs were lost, incidentally.
Posted by Nicole at 9:22 PM No comments:

The good news is, my kid loves school lunch. She told me tonight she wants to tell the lunch ladies that this is the best food she's ever had. I told her to go right ahead, they'd be so happy to hear it.

The bad news is, this is hard not to take personally. What about my Mark Bittman pasta tonight? And the crusty bread and olive oil accompaniment? Nada.

Having eaten lunch where my kid goes to school, I have to admit it is pretty good, fresh stuff. Not the canned green beans of my childhood. In truth, I am mostly just delighted that she eats a good lunch and I DON'T HAVE TO MAKE IT.

Week 98—Back to School, for the 1st time

Mon – Homemade pizza, salad
Tues –  Chicken stir-fry
Weds – Beef skewers w/cherry toms and mushrooms
Thurs – Pasta, beans, and greens
Fri – Burgers/dogs
Alts – Alfredo; falafels
---
I've been admittedly lax on the whole meal-planning-grocery-shopping ritual this latter part of summer. It's been a nice break, reminding me of the order that is brought to my life when I do menu plan. No scrapping for meals, no looks of "what's this?" when I set, uh, something on the table.

Tomorrow, 9/12, represents the first time in my 6 years of parenthood that I will officially ship a kid off to school for all-day every day education. Which means one huge thing to me: I have to have 3 kids who are in varying states of neediness (diapers to tricky zippers) out the door by 8AM every day.

Some parents shed tears at the prospect of sending their little ones off to kindergarten. I think my overriding concern is for one of a dictated schedule for the first time in years. What does parenthood look like from here? Should be an exciting week. Happy cooking.
Posted by Nicole at 9:03 PM No comments: 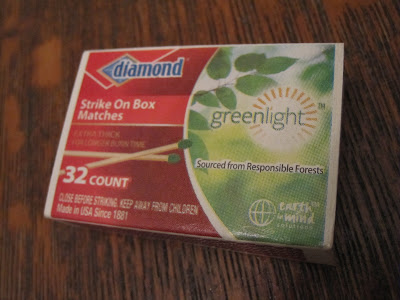 I'm packing for a camping trip (sorry, Matt, be there in a sec) but simply had to pause when I came across this book of matches.

Are you kidding me? Did you, oh Diamond Matches-Makers just completely negate the Tremendous Environmental Good that you bestowed on we, the purchasers of your Responsibly Sourced wooden matches by using a multi-color printing process which is without question vastly more environmentally harmful than using irresponsible forests for the wood splinters that comprise your match sticks?

Rich! This makes me want to use TWO matches each time I light up my dubiously gathered wood pile to burn my Responsibly Sourced Jet-Puff marshmallows.

Seriously people. Stick with the 2-color print job and spare me the litany on how green my choice of matchsticks is.
Posted by Nicole at 8:59 PM 1 comment: 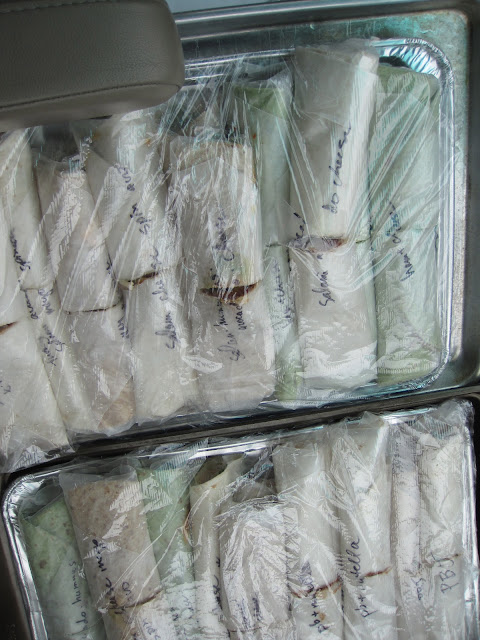 My husband and I spent last Thursday evening assembling wraps for a Habitat for Humanity crew working in a tornado-damaged area of NE Minneapolis.

Thanks, Becky, for the suggestion to make wraps! So, the photo of them on my car seat (yum) doesn't make them look too appealing, but they looked decent in person. They were pretty fun to put together and it was easy to make a big variety for all tastes. We had chips, cookies, and salsas as well.

By the 40th wrap, I even had a pretty slick deli-style wax paper roll-up going.

The event inspired a lot of wrap-oriented lunches in our house lately, using up left-over ingredients.
Posted by Nicole at 8:44 PM No comments:

Cakes, as decorated by the kids

This year, the kids were very excited to decorate their own cakes. The theme for both was basically "stick toy on top of cake" so it was a pretty clean proposition. 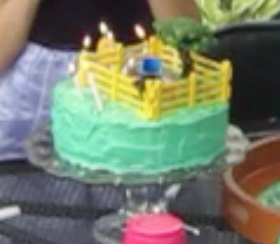 My daughter wanted a horse cake, so we frosted it with a lush green pasture, then she put a fence, tree, couple of ponies, hay bale and water trough on top. I'm describing it so thoroughly because I didn't get a picture of it other than in video form.


My son wanted a spider cake. I was pretty excited to make a round cake and give it big hairy spider legs, but he spotted some Spiderman cupcake toppers that he thought were the coolest things ever. So instead, I frosted a web onto the cake and he popped the little Spidermen all over the cake. 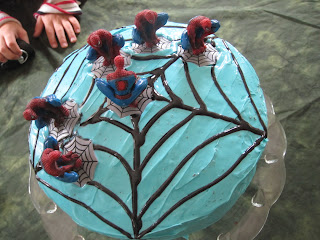 Pretty simple cake year compared to the Barbie cake last year, and alligator cake from a couple years ago!