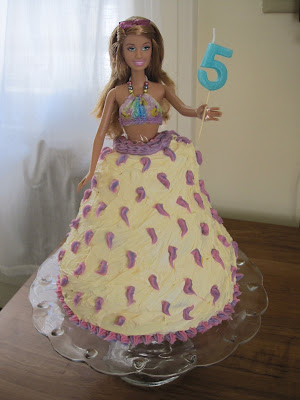 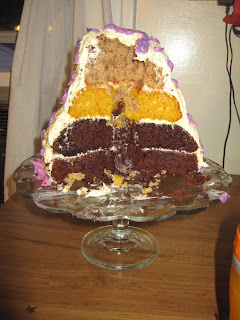 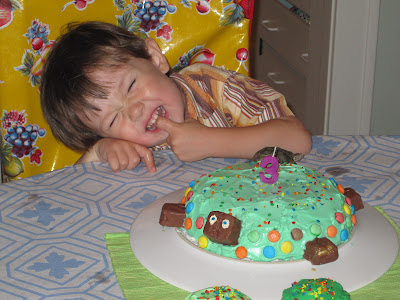 August means birthday season at our house. My daughter wanted a Barbie cake -- the real deal with a doll she could pull out at the end. My husband said it was feminism hell. A tank-top clad Barbie leaping out of a cake. Perfect. What I didn't realize is that most cakes apparently assume you're using a Barbie topper. The cake dissection photo I'm including (be forewarned, it ain't pretty) shows my 3-tiered attempt to make this thing tall enough to accommodate Barbie legs. They are LONG.

The recipe called for the bottom two layers (seen here in chocolate). Ok. They reached maybe up to Barbie's kneecaps. At this point, my mom said, "I remember making about 5 little cakes to make it come out." Me thinking, "Hm."

The second layer, in yellow, was salvaged from part of her brother's cake. He was going to have 2 turtles. Now there is only one. Cake now reaches Barbie's thighs. Hm indeed.

The final layer is the fattest muffin I could find at Target. I essentially glued it together with frosting after carving a hole and jamming Barbie into it. It was touch-and-go for a time, but came out ok. It meant that I had to frost the whole thing w/my fingers be/c it's the only way I could get a consistent look AND keep the cupcake pieces together. Happy for you readers, you probably didn't eat it. I kind of like the streamlined (as in 1930's Art Deco) design of the dress. And the slugs I put on for icing to decorate it. They DO look like slugs, don't they? Or Medieval holy spirit flames. I guess my mom used to put little dots all over. That would have been pretty. Anyway, it was truly fun to make and the birthday girl loved it.

The turtle cake was a simple operation. Bake cake in bowl. Frost. Insert Snickers bar legs/head. Decorate "shell" as you wish. I made cupcakes to supplement since the other cake went into Barbie's dress. Result: a happy birthday boy.
Posted by Nicole at 8:08 PM