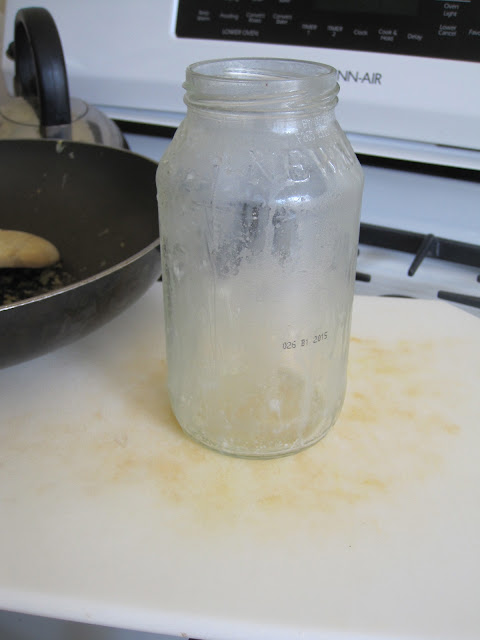 It looks pretty innocent in the photo, doesn't it? Just a greasy mason jar, ready for a wash or toss into the recycling bin.

Until you know that only moments before this photo was taken it was full of liquid bacon grease.

I walked in the kitchen after leaving my kids unattended for just a few minutes too long to find this empty jar. I asked where all the grease had gone (I collected it here after making bacon for lunch until it cooled enough to toss). My daughter said her little brother had dumped it all out into the sink as part of an experiment. She then said it was ok, she took care of it by draining the sink and putting in fresh water for washing dishes.

Mild freak-out on my part. Drained the sink, ran hot water down it for the next 10 minutes. Crossed fingers that it was enough. By this point, the grease that didn't make it into the sink had started to coagulate and I saw the full extent of the damage. All over the counter, the carton of eggs and tissue box on the counter, dumped in the recycling, down the cupboard front, and all over the floor. Oh, and on the leather chair cushion that my daughter was standing on to wash dishes.

Then my daughter informs me her brother has colored on the living room wall behind the couch. Another freak out on my part, slightly less mild this time. I sweep him up to take him up to a time out/nap, then come to my senses and instead put him to work cleaning up. By the time the living room is cleaned up from crayons, toys, strewn cushions, etc, I take him up for a nap.

My daughter comments, "Mom, isn't it nice we're such good helpers?" I wrench out a smile but don't manage to say anything. She offers to help empty the dishwasher, while polishing her own halo. I take her up on it. While we're working, she says, "Some days are harder than others." I burst out laughing to which she comments, "Well, I didn't expect that reaction!" And I laugh harder.

We finish up and simultaneously wonder what her brother has been up to. I go to check and find him covered in red marker on his belly, writing in his sister's special notebook. He says as sweetly as pie that he's making clues for me to follow. Ah ha. So cute. So maddening. So....life as a parent.
Posted by Nicole at 12:09 AM