I'm going to start out by saying that this was not a spectacular year of cake-decorating. But truly, the kids didn't really care as long as they had candles to blow out. 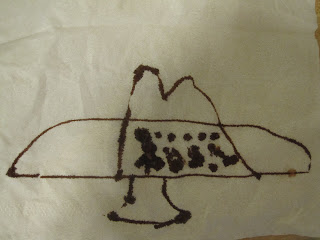 I enjoyed that my daughter threw together a literal napkin sketch for me as I entered the kitchen to decorate. The mountain is the cake, sitting on a glass cake plate. The little dots are frosting. The vague figures under the dots were to be various Littlest Pet Shop characters drawn in frosting.

I was pleased she thought I had that level of skill in decorating a BUNDT CAKE. So what I created looks a little more like a hat a frail little grandmother would wear. No problem. At least the fluff on the Pet Shop character didn't ignite when we lit the candles. 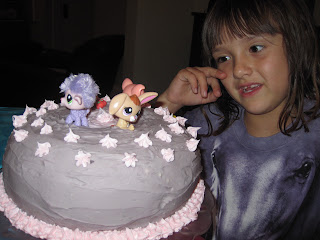 My son's cakes are supposed to be Lego Ninjago spinners, dueling right there on the table. Everyone thinks they look like alien space ships, so at this point I'm going with that. 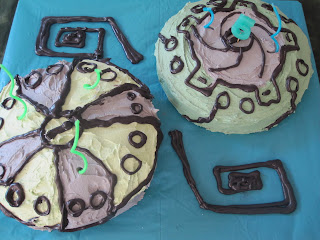 Which reminds me. I made a "classic yellow" cake mix for my son's cake. Tell me what the difference is between Classic Yellow, Light Yellow, and Vanilla Yellow. Why do they sell all three of these at my grocery store under the same brand name? I must have debated that for at least 2 minutes before settling on Classic Yellow. It was much better than I expected for a box cake mix. Good thing I didn't go with the Light Yellow. Might have been terrible!
Posted by Nicole at 1:10 AM